The conceptual plan for the reconstruction of the Eastern Railway Station was prepared by our office in 1998, which was further developed in 1999 with the feasibility study and return calculation after the approval of the Cultural Heritage Protection Office and the MÁV jury.
According to our proposal, the MÁV functions have been installed in the “barracks” building, so the outdated workplaces will be eliminated and the original space system of the building can be restored – filled with new functions. We recommend the development of a new pedestrian traffic system, the main focus of which is that those arriving from the metro can reach the trains directly by means of moving walkways through the pedestrian passage crossing through the basement level. On the ground floor, the area up to the Lotz Hall is transformed into a resting-waiting zone by pulling back the trains. It is advisable to construct – as an independent, structurally separate box – the pedestrian passage running along the entire length of the station and the accompanying shops on both sides in one phase.
The 42 m width allows the installation of a line of shops in connection with the main traffic route. The passengers coming from the metro in the new building wing on the -1. level arrive at the ticketing hall. The space is enclosed on one side by the ticket counters, the MÁV customer service office and on the other by shops. The escalator for the second exit of the line of metro 2 also arrives here, providing a direct connection between the metro and the railway.
Light flows in through a 26 m diameter ceiling breach above the ticketing hall, so the renovated hall structure is clearly visible. 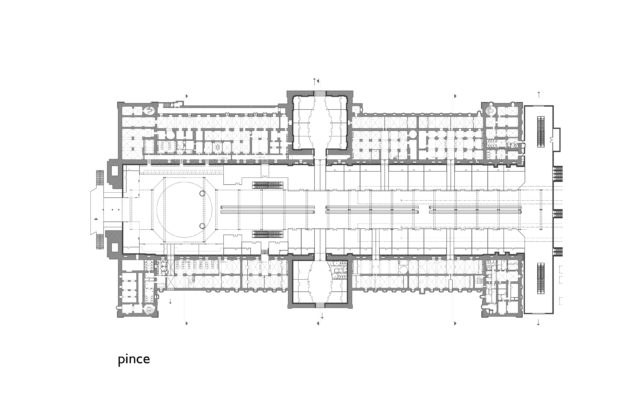 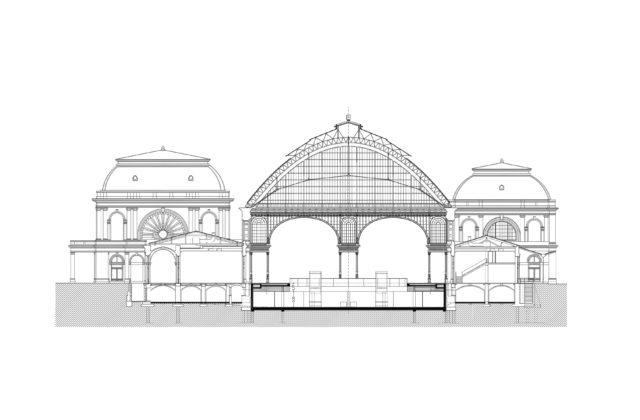